Timothy Charles Holmseth LOVES the salacious headlines. Take this one for instance. “Fifty-five children found buried in Florida“, but the blog post was not about 55 children at all. It was about his persecution syndrome and his hallucinations that people are out to get him.

Hajicek let Holmseth know that Xentel didn’t want Holmseth to write anything about them.

Hajicek’s request (warning) to Holmseth was not Constitutionally available.

Holmseth was writing a story based on a tip he received from the grandmother of a missing child named HaLeigh Cummings. It involved a Photoshopped picture of HaLeigh that had been altered and featured on a website being used to con the generous public out of money.

Holmseth acquired emails from the web developer that showed the developer had originally received the Photoshopped picture from an account at a Fort Lauderdale company called Xentel.

Xentel had been sued by the Attorney General’s Offices’ in at least seven states.

Hajicek pressured Holmseth to not write the story but Holmseth did anyway. The FBI paid Xentel a visit and interviewed Donna Wagoner.

Soon thereafter the FBI interviewed Holmseth and requested copies of many of his recorded telephonic interviews.

From that day forward, Holmseth was systematically harassed, harangued, threatened, extorted, blackmailed, and the police refused to protect him or investigate crimes committed against him and his family.

Sheriff Barb Erdman too – was quiet as a church mouse. Although Holmseth had cleary uncovered something that involved a federal kidnapping, the authorties in Polk County, Minnesota were tip-toeing around and shushing people.

In 2011 Hajicek and EGF City Attorney colluded with others in a step-by-step process, to violate Holmseth’s rights and orchestrate circumstances to arrest him.

Michael LaCoursiere, public defender, told Holmseth that Galstad was going to call Polk County Deputy Jesse Haugen and Sgt, Chris Olson, EGFPD, to lie on the stand if he demanded a jury trial and wouldn’t make an Alford plea.

Police reports and records with the EGFPD are splattered with the word “Florida”.

Who is Ronald Galstad trying to protect?

If you notice, every single person in this post is someone Holmseth is accusing of being after him or someone that is trying to infringe on his “constitutional rights”. The problem with all of this is Holmseth believes that his constitutional rights entitle him to make up salacious and disgusting stories about people who have either stood up to him or have snubbed him because of his mental issues. 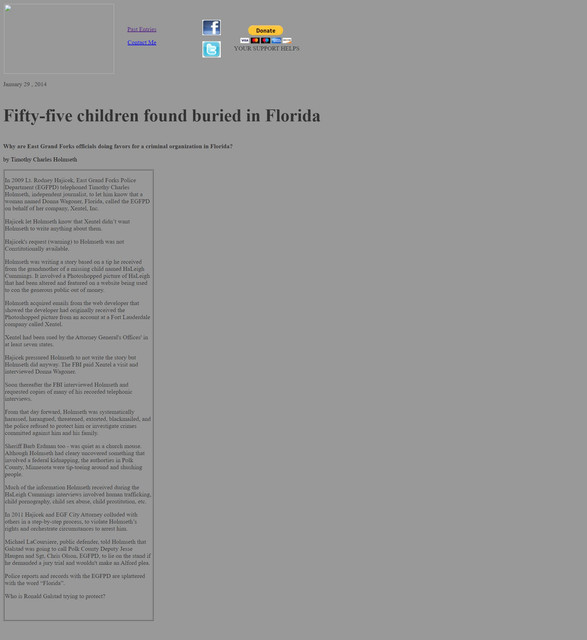